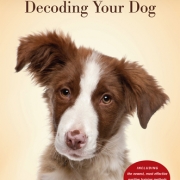 The new book Decoding Your Dog from the American College of Veterinary BehavioristsÂ will help owners better understand their dogs and Â overcome common behavior problems. Each chapter is written by a veterinarian who specializes in treating behaviors problems.

Dr Katherine Houpt contributed chapter 3, “Creating a Mensa Dog, What Learning Really Is, and how Dogs Learn,” which covers how to extinguish (get rid of) bad behaviors, how to entertain a convalescent Doberman, and why wolves aren’t as smart as they think.

“A must buy for the caring dog owner. Two paws up!” – Dr. Nicholas H. Dodman 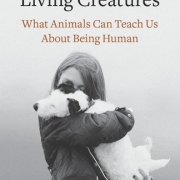 The Soul of All Living Creatures by Vint Virga DVM (Random House) is a very sweet book. Dr Virga is a behavior specialist, like me, and he describes the animals and their owners who he has helped. His kindness and empathy for all animals from a leopard to a mouse shine through.Â  If you love animals you will love this book.

If you would like to read stories about the intellectual accomplishments of dogs, these letters from owners to the British magazine Spectator are wonderful. Dogs that can trick other dogs, dogs that understand the Pythagorean theory, and dogs that know the value of money, etc. etc. are featured. Below is an example:

Topsy had a favourite resting-place in an easy-chair, and was very often deprived of it by a dog which came as visitor to the house. Topsy did not approve of thisÂ and her attempts to regain her seat were met with growls and bites. This justified an act of eviction, and the busy little brain decided on a plan. The next day, as usual, the intruder established himself in the chair, which was close to the open door. Topsy looked on for a moment, and then flewÂ savagely out of doors, barking at a supposed enemy. Out ran the other dog to see whatÂ was up, and back came Topsy to take possession of her coveted seat. The other dog came slowly back, and curled himself up in a far-off corner. 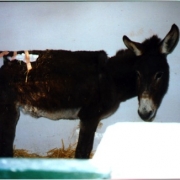 Here is an adventure for the sake of donkeys in Africa. SPANA (Society for the Protection of Animals Abroad) operates charity hospitals for sick or injured donkeys and I was fortunate enough to visit one in Moracco. Dr Caroline Hahn, a veterinarian and former student of mine writes:

Starting with a send-off by the incredible explorer Ranulph Fiennes at Buckingham palace I am joining two other bikers and two support vehicles for 18 days to negotiate over 4500km through 9 countries to Morocco, giving 78 talks for charity!

The group we are supporting is SPANA, which provides veterinary care for equids in the third world, and were it not that I really believe that this charity deserves my support I would not be embarking on this crazy trip. I would be very grateful if you could see fit to give us a small donation , it all adds up.

Details for making a donation (by text if you prefer) are on the horsepower site are onÂ www.horsepower2012.com, and as of Thursday you â€˜shouldâ€™ be able to follow us live on â€˜The Routeâ€™ tab â€“ do have a look, it would be nice to know that somewhere in the ether I have friends who are watching! FYI, the Scotsman newspaper did a short blurb on me last weekÂ and for those of you living in Scotland, on Wednesday at 6 pm STV will broadcast and interview with me and show a sequence of us leaving the palace for the Chunnel.